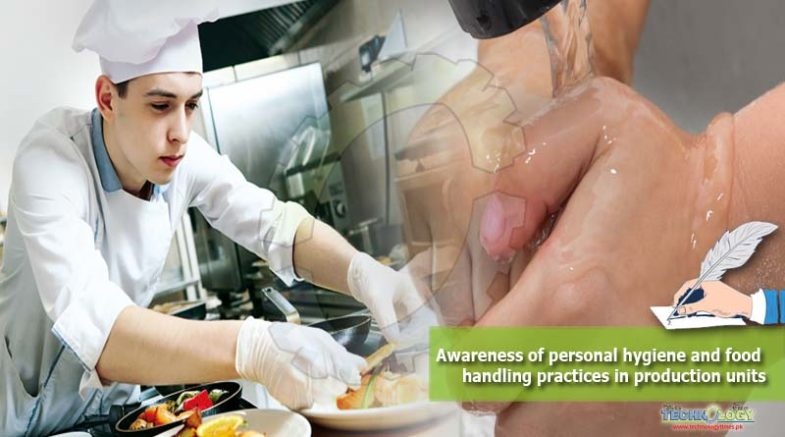 These may defied as: A food handler may be a person and someone who works in a food industry, hotel, restaurants or who handles food or surfaces that are possible to be in contact with food such as plates and bowls.

Along with it food is also a leading cause of transferring harmful microorganisms to human body know as food born diseases. There may be several reasons of food born diseases including spoilage of food, eating habits and poor food handling practices. Physical condition and hygiene status are the key factors which make food handlers a potential source of contamination in food. The extrinsic contamination of food can occur at any point on its way from the producer to the consumer.

Food handlers particularly performs main role here, observational data propose that unhygienic practices in food processing units, food institutions, and home, play critical role in the contribution of food-borne diseases. . The purity of an individual and his body and wears, refer as personal hygiene. For safe food preparation food handlers must be clean and hygienic.

Food handling practices are scientiﬁc regulation included preparation of food, and storage of food, and food handling practices in ways, which prevent food from contamination. Quality is a degree of excellence and consumer satisfaction about the food. It is essential in any food industry to maintain the quality of food.  good quality food product. Exploration factors that are crucial in the treatment to determine the factors that affect the characteristics of food products.

Numerous food borne disease have been stated to be connected with poor hygiene practices. Each year 9.4 million people suffer from food borne diseases all over the world. In a book of WHO named food borne disease, importance of the education of food handlers is greatly emphasized. They concluded that food contamination only can be avoided through good health and good practices of food handlers. Poor personal hygiene like carelessness in washing hands after using bathroom may result in pathogens on hands of food handlers. Food handlers are the main source of transfer  pathogens from raw to ready to eat food, and they perform signiﬁcant role in growing pathogens instinctively. Some human-speciﬁc food borne pathogens like hepatitis A, typhoidal-salmonella, staphylococcus aureus, noroviruses may transferred from hands, wounds, cuts, and hair of the infected ones. Dining outside and hotelling is become a part of modern life styles. people consume outside the home, as a result the percentage of morbidity and mortality in the European Region increase, root causes organisms includes campylo-bacteriosis and salmonella. Increasing the number of food poisoning cases food-related worries has led to call for better hygiene and quality practices. Food handler’s health and their hygiene, Knowledge, and food practices are major points to focus on. The hygiene of food handlers directly or incidentally plays a compelling role in food safety at each stage of the food series from production to preparation. For diminish food borne outbreaks, it is important to understand the communication on prevailing food safety views the Knowledge and practices of food handlers. Imperfect employees ranked second in the sources of food borne disease outbreaks. To avoid the possibility of food becoming contaminated with pathogenic microorganisms related to employees who are sick,  measures for physical examination of employees must be adopted before hiring.

The word safety of food  is gradually being used in place of food hygiene and comprises an entire variety of problems that should be spoken for conﬁrming the safety of prepared food. The safety of food is a procedure of preparation of food, handling of food, storage of food in methods that avoid food borne diseases. The hygiene of food perhaps set too much prominence on cleanness, but the safety of food need plentiful more that premises cleaning. The safety of food is very imperative matter in developing and developed countries acknowledged that millions of death and illnesses due to the food borne illnesses yearly. The center for disease control and prevention estimated that 20% of food borne illness caused by bacterial agents who are transmitted through infected food handlers. It is reported that approximately 10% of the population of industrialized countries suffers annually from food borne illness. Major causes of food borne illness in restaurants are storage conditions, diseased persons, hot holding contaminated raw ingredients of food, poor insecure of food source, cross contamination, and inadequate cooking of food. Contamination of food and food borne diseases can happen and originate from institutions and food establishment such as food production units, restaurants, school canteen where foods are sold and served by food handlers. Food handlers are a vital link between food and consumers. Food handlers with poor personal hygiene working in food production units or food establishment can be source of infection of various protozoa and enteropathogenic bacteria. The viruses rise on food and frequently cause illnesses. Hepatitis A,  and enteropathogenic bacteria can be transferred from ﬁngers, nails and mouth of infected ones to vigorous individuals. After eating food, the food that remains in the human intestinal tract in which food contain living pathogens present can cause infection. This is very necessary for food handlers to regularly abridge different food safety activities, such as cleaning of the surface, appropriate storage of food and washing of hands. To prevention of food borne diseases in food production units or food establishments, where the movement of activities can ﬂuctuate throughout the day, Food can be avoided to contamination through the good health of food handlers and their hygiene

It is clearly mention in the Holy Book QURAN cleanliness is half of Faith. Five keys developed by world health Organization to keep food safe, which is keeping food clean, cooked and raw food should be kept separate, cooking of food on appropriate temperature, store food at suitable temperature, for cleaning of food safe water should be used. In developing countries, these ﬁve keys are very important.

According to THE NEWS international in September 2015, revealed that a raid conducted by ICT (Islamabad capital territory) team supervised by assistant commissioner Waqar Cheema in Marriot hotel, and sealed its store, kitchen and bakery for serving low-quality food items to the consumers. The Pakistan Demographic and Health Survey 2006-07 revealed that approximately a quarter of all children less than 5 years had a diarrheal incident.

Higher morbidity and mortality related to food borne disease, particularly among children and infants. Reﬂective studies conﬁrmed higher levels of aﬂatoxins, pesticides impurities and heavy metals in wide range of foods leading to increased disease burden especially kidney failure and the resurgence of cancer in Pakistan. Currently, there exists no speciﬁc and assimilated system of monitoring and investigation to diminish health and economic losses related to insuﬃcient food safety system in Pakistan.

This study was conducted in various food production units in Lahore, among food handlers on the base of Knowledge, Attitude, and practice. In this study, overall Knowledge of food handlers were good, result was 85%. And Attitude score was 66% approximately result was good. However, Practice score was poor. Signiﬁcance difference was seen between Knowledge and Practices with p value < 0.05. Moreover, Signiﬁcance difference was seen between Attitude and practices with p value < 0.05. All this data concluded that implementation of  GMP’s, personal hygiene, HACCP, FSSC 22000 and other food related laws are essential to keep this world healthy.